I may have more than the average person when it comes to vintage guitar effects, but the nerd/hoarder in me is always looking out for something different, cool, and possibly a hidden holy grail effect that sounds amazing but is hard to find...

I set up this page as a running list of pedals I am constantly searching for in hopes that my lonely cries will be heard.  Soooooooooo, If you have one or more of these and would like to strike up some sort of deal, or if you happen to know where I can snag one,  please let me know.
You can get my Email here and we'll talk! 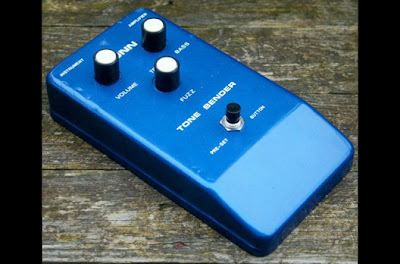 The Gunn Tone Bender was a sweet fuzz out of New Zealand in the 1970's.  I'm sure it's pretty awesome, and after my trip to NZ last year I know I need this thing!
please let me know if you got one/// 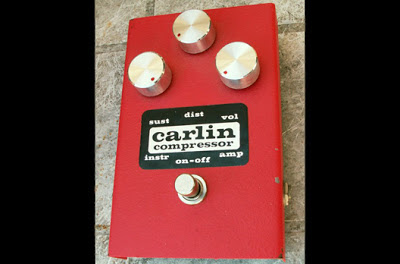 The Carlin Compressor was a combination compressor/fuzz pedal from the 70's, made in Sweden. They were quite popular with Swedish rock bands from the day, and the sound is supposed to be pretty sweet. Again, it's another pedal that shouldn't be hard to find, just not in the US...
So if you got one, let me know! 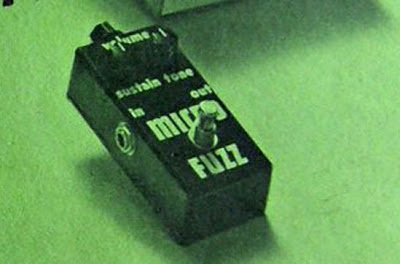 Frogg was a short-lived effects company from the late 70's mostly known for their crazy filtering pedal the Frogg Compu-Sound, but what is quite less known is that they made a fuzz too! I wasn't able to find any photos of an actual unit, just this advertisement. So even if you have one and don't want to sell it, I still would love to hear from you--- (but if you do want to get rid of it by all means, hit me up!) 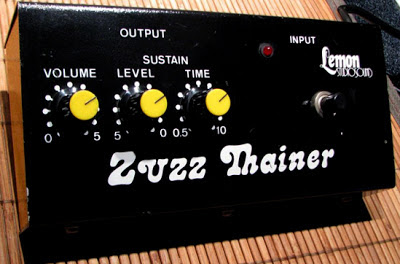 So I just found out about this recently.
What a badass name for a fuzz!
yep, I need this thing. 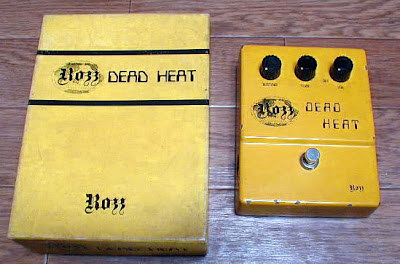 The Rozz Dead Heat was a Japanese Big Muff clone from the late 70s/early 80s and has been on my watch list for quite some time. If you have one and don't want to let it go, I would still love to hear from you about how it sounds. This pedal was also sold under the Anderson Crazy Muff name, which I wouldn't mind owning either! 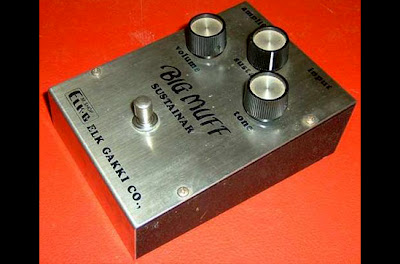 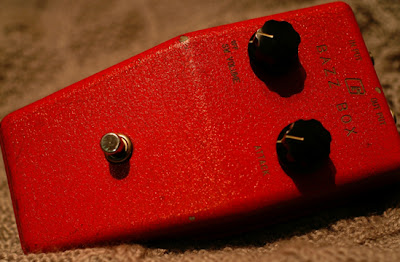 The Guyatone Bazz Box, also called the "Buzz Box", was (I believe) a 1960s Japanese copy of the Vox Tonebender.  I could be wrong there, but what the hell?  All I know is, it's Red, lives in a Tonebender enclosure and says "BAZZ" on it.
Yeah, I want one. 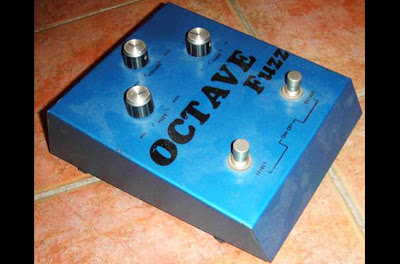 Believed to be an Italian copy (or at least inspired by) the fOXX Tone Machine, this huge blue Monster just looks like it would sound amazing. 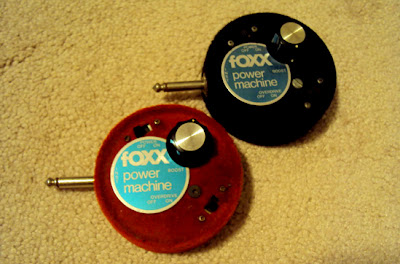 Ever see one of these?
Didn't think so.
These fuzzy overdriven plugin effects from fOXX are not easy to track down, but maybe you have one collecting dust in a box somewhere?
Please let me know!!! 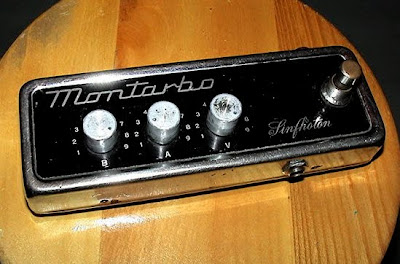 The Montarbo Sinfhoton is an Italian fuzz that originated in the late 60s and was built all the way through the mid-80s, if I'm not mistaken. It has a very Big Muff feel to it although the circuit is not the same at all. It was also sold under the brand Sisme and called the "Sismetone".  I am more interested in the earlier versions, but if you have a newer one I wouldn't mind that either! 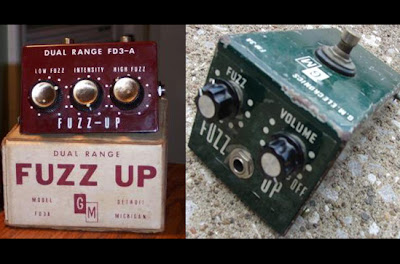 Although I am pretty sure that these are crappy clones of the Maestro FZ-1a from the mid 60s, I would still like to have one or both of them!  The Dual Range FD3-A version looks extra badass in that raspberry paint and the knobs for High and Low Fuzz are sweet.
If you happen to come across one, you know what to do!!! 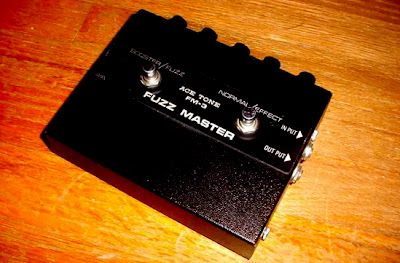 Another vintage Big Muff variation out of Japan.  Ace Tone built two fuzzes before this one; the FM-1, which was like the Shin-Ei FY2, and the FM-2 which was closer to the Univox Super Fuzz.  The FM-3 for some reason is harder to find than the other two, but since I am the Muffy nerd that I am, it's the one I want!
So let me know./ 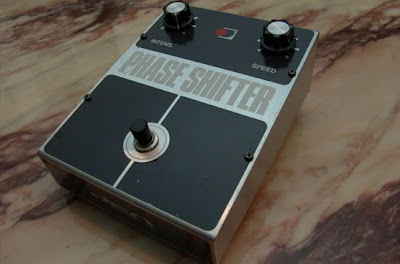 This pedal really jumps out at me.  It was Italian-made, in I believe the 70s, along with the Jen Flanger and the Jen Fuzz & Sustain, which I happen to own.
My other love is Phasers, so if one of these pops up, please let me in on it! 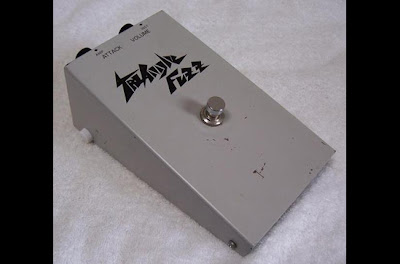 Do I even need to explain why I want this pedal? 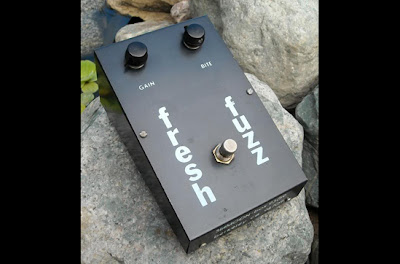 I know that there are a couple different versions of this pedal and I have heard that none of them sound particularly good... But being a fan of the Seamoon Funk Machine, I kind of need the Fresh Fuzz too.
Don't I? 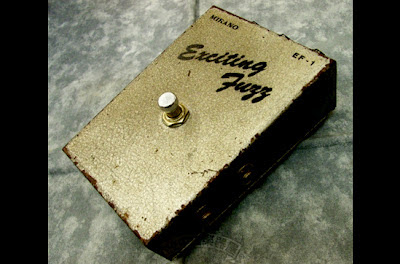 The Mirano EF-1 Exciting Fuzz was another early/mid 70s Japanese Big Muff copy, that looks like it was supposed to be a Fuzzrite?  making it pretty damn cool.
So yes, add that to the list of WANTS! 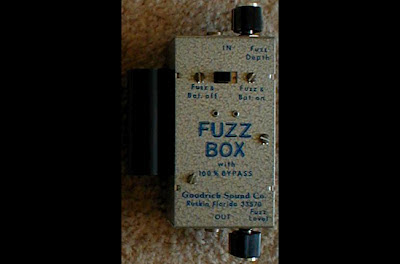 The Goodrich Fuzz Box was the first fuzz offered from Goodrich back in the early 70s. It then spawned the Steel Driver series and the String Box, which we discussed here in a past post. I am assuming that it is a Jordan Bosstone clone because the other ones are too, but I am never sure till it's here with me!
So if you got one, please let me know./// 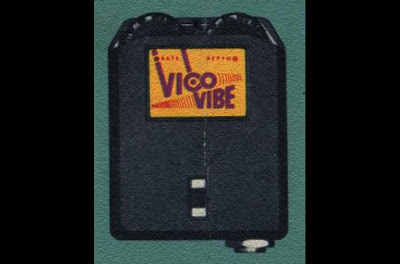 The Jordan Vico Vibe is the last piece of the puzzle I need to complete my "Jordan Juniors" collection. Since I missed out on that ebay auction last year I haven't seen another one. Maybe you got it? please let me know... 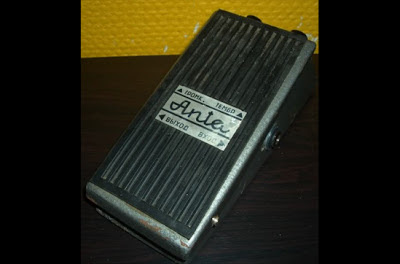 The Anta Fuzz was a pedal out of the USSR from probably the early 70s. There were a few other pedals from this series that you may have run across like the Anita Fuzz/Wah and the Inta Wah.
So, yeah... if you got one then please let me know!

*If you want a more comprehensive list of the whacky stuff I'm looking for, please Go Here!